Quote
I've always wanted to give the "gun" a miniscule chance to actually fire.
Or activating it toward someone would cause them to play along.
Maybe you could use it as a means to "threaten" some people in New Attnam.
"I think my associates were turned into monkeys." ~Shitty Bill
Oct 10, 2017, 6:55 pm
#802
View profile Send message Find posts Find topics

Batman? wrote
Does your relationship with cleptia have an effect of the whip of thievery?
Pretty sure it does.
Batman? wrote
its been so long since i had gotten that far i didnt think it through. arrrr!!!!!!
Oct 31, 2017, 12:39 am
#805


The above code for some very bizarre reason generates a random number between 0 and the result of the following:


Quote
10 - [your relation to Cleptia] / 200
If that number ends up being 0, the check passes. Otherwise it fails.
(e.g. if your relationship value with Cleptia is 2000 you'll have guaranteed success every time because it generates a number between 0 and 0, but 1900 is a 50% chance per hit because it generates a number between 0 and 1.
However the relationship caps out at 1000, so you'll only ever have a maximum of a 17% chance.)

In fact there's a lot of code in IVAN which specifically looks to produce a negative number and then inverts it to see if it's 1 or 0 and I have no idea why. It seems like a very roundabout way to do checks/rolls.

The part of the hit code where it checks if Cleptia helps and increases the relationship is:


Interestingly the code in there also says that an inflexible whip of thievery cannot steal items (flexibility must be at least 5, which is the flexibility of flesh and the most inflexible cloth materials)

All I got out of that was the idea to socm to a human flesh whip
Batman? wrote
its been so long since i had gotten that far i didnt think it through. arrrr!!!!!!
Nov 8, 2017, 2:45 pm
#807
View profile Send message Find posts Find topics

Just learned that some creatures (e.g. spiders) are too small to trigger land mines
Edited 1 time

TX wounded up on another island, so i figured I'd just kill Petrus instead. After the first attack I was horrified by my situation, remembered I had a ring of bravery and put it on. Found it to be quite a fitting pair of last words!

So, uh, I've finally managed to beat the game. Sort of. I killed Petrus and all the others in the cathedral, took his nut and everything. I tried to become the avatar of chaos, but nothing happens when I walk out of attnam with his nut? I thought it was because I wasn't his champion, so I offered everything there is to him, but I still couldn't win when leaving attnam?
Jan 8, 2018, 11:08 am
#815

Hmm... I tried to do that two times, but maybe I never actually did it in Attnam. Does your alignment with him go down once you've offered to him and became his champion? I got Neerc Seulb and then offered to him to get Champion status again, then I went to Attnam and prayed to him but got smithed. Guess I didn't have the patience to do it all over again. I read a Solicitus book and then became Champion of Valpurus instead and sat on the throne

Thanks anyway Capristo! I'll just have to win again

Yeah it would go down slowly. Also keep in mind after you become champion you have to wait much longer before you can safely pray again

Congrats on the victory!

I didn't think that she is really tough as everyone is saying, so I tried to kill her in fair combat.

I oneshot her with my first hit, next turn she revives and oneshots me

That was REALLY frustrating, but I learned my lesson. Next time she won't get away easily.

badbeaver wrote
That was REALLY frustrating, but I learned my lesson. Next time she won't get away easily.
I bet she'll polymorph you into a giant spider one her first hit or something similar.

Does being slowed alter any effects like polymorphism or teleportitis? Also, would slowing/hasting a ring of polymorph effect its' polymorph interval?
Jan 22, 2018, 4:56 pm
#821

Today marks quite a feat, although the feat was not really done by me. I managed to get a hold of a scroll of body switch and changed into a tomb guard (big mistake by the way, they cannot read...) and ventured into the enner level of TX. In there I quickly found the two enners, and was lucky enough to kill the second with a fireball while he was stuck in a long corridor. This was going great I thought to myself and went on to get myself fed on his corpse. Lo and behold, right next to him there was a pile of treasure! I quickly rummaged through it and to my astonishment, most of the gear was highly enchanted! That's when I noticed the assortment of scrolls and wand... and the corpse of none other than Ischaldirh himself! Quite an acheivement Mr. enner boy! 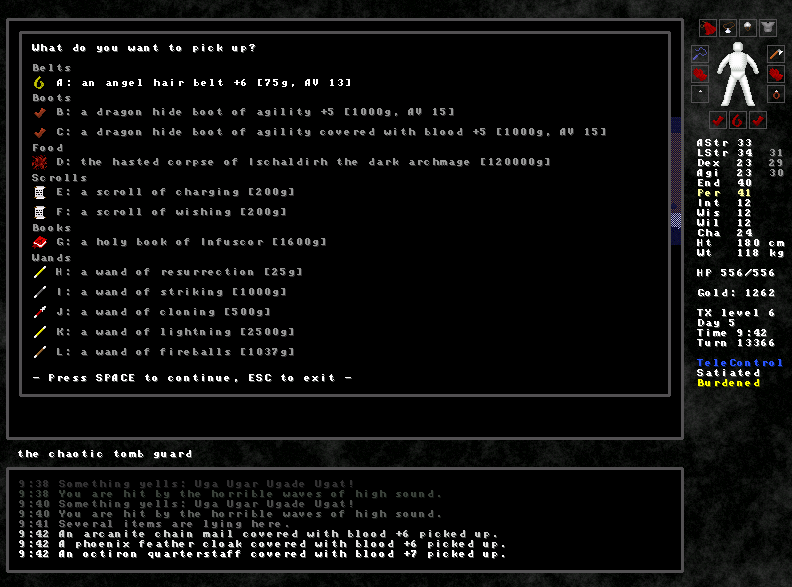 Ninja edit: Also got a mithril axe +7 from Loricatus after the body switch. Bug?

Lordmushroom wrote
and the corpse of none other than Ischaldirh himself!
o.0

The poor old bloke must've spawned right next to the dear boy.

Hmm... So I've managed to traverse the entirety of Xinrochs Tomb now (thank you Ischaldirh/Enner boy) but I'm having trouble with the ending. I'm infuscors champion, got the lost ruby sword and the skull. Chatted with the necromancer, gave him the veil, and he told me "What are you doing, that belongs with the Champion of infuscor!" or something similar. What am I supposed to do to get an ending?

A skeleton that was wielding 2 shields killed me today.

I question my life decisions.

Here's a little thing I found today, turns out Elianise's ability where she charms (Aka Flagrantly steals) your valuble equipment and items can also affect other's, including of all people, Petrus. I pett-ified her via Dulcis prayer, and it was easy as taking her to our good old high priest, and she robbed down to his boots. Though due to her low carry weight and ai she instantly drops anything like his armor, but NOT his Justifier. Have yet to win, but knowing me, i'll still probably be dead.

Happy stealing to our 'lawful' buddies.