Hah! This seems to be cropping up all over.

Welcome to the forum!

Batman? wrote
I just found a shield of the phoneix on the floor of GC1. The wiki says it give life saving status, does it dissapear after use?
Yes.

what is making my health slowly decrease, and how do I heal it? I don't see anything on the wiki or in the changelogs about it

to be clear, I mean total health. whatever is causing these little black marks to show up on my body when I get seriously hurt

Yep those are permanent scars that you can get randomly. I don’t know the details but I’m guessing they’re more likely after a critical hit

Scars are in the game since before 0.50, so you'd have to go far back in the Changelog to see them added.

No way to heal them, but they only have a chance to be created after a crit or an attack that deals very heavy damage to you, AFAIK. Get a good armor and you will gain one only very rarely.

I don't believe scars were in 0.50. I have no memory of encountering them prior to CVS.
"Put more stuff in the... thing where... more stuff goes in."

Ischaldirh wrote
I don't believe scars were in 0.50. I have no memory of encountering them prior to CVS.
Yep, they were introduced post-0.50
Batman? wrote
its been so long since i had gotten that far i didnt think it through. arrrr!!!!!!
Feb 12, 2018, 4:48 am
#834
View profile Send message Find posts Find topics

kinda sucks getting a couple in the underground tunnel before I have armor, but maybe I'm overestimating how much they end up hurting me

Wise men say that Infuscor once was very fond of Xinroch because of his beautifully shaped skull, and now that it is rid of that pesky flesh...
The Library of Attnam
Feb 12, 2018, 12:22 pm
#837

Rotinaj wrote
this post officially brings me to 1 post per year, so I guess I'll see you in around 12 months
I'm impressed you remember your password
"Put more stuff in the... thing where... more stuff goes in."

Getting one or two scars can help keep kamikaze dwarves away since
SPOILER ALERT. Click here to see text.
it keeps your hp below the threshold for generation

I think you are overestimating it. Most of the time you die from critical hits to head/groin, explosions, poison, lost limbs, etc. I don't think 1 or 2 HP (or even 4 or 5) is a big deal. Endurance is easy enough to train if you want to compensate for it. See you in 2019!

here's a cool tip for the thread- if your dog dies in a shop, you have to buy the corpse! 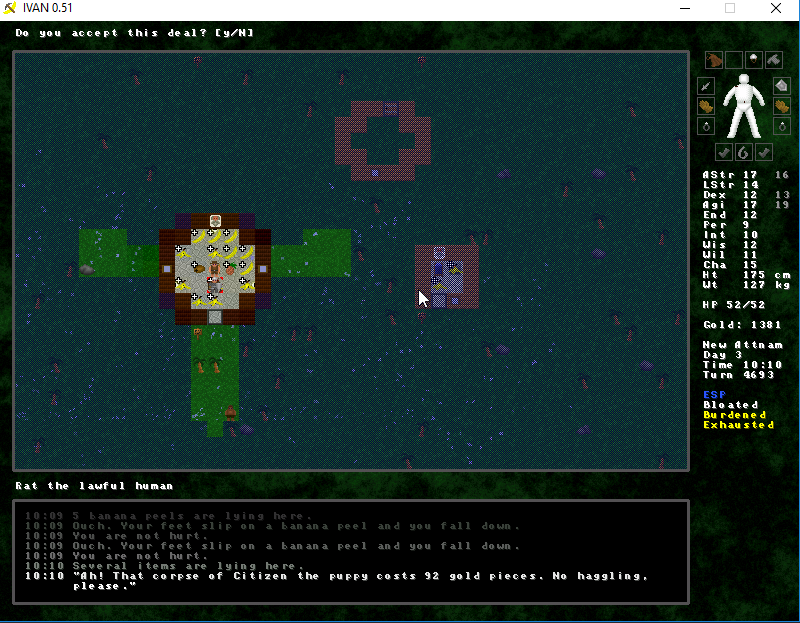 also, were the thresholds for a status becoming permanent lowered? I got permanent ESP from a handful of eyes and telecontrol from like, 3 dogs

I think it’s always been 3 dogs and 3 eyes

oh, I was thinking of haste. I still remember drinking fountains and breaking wands of haste to try and get permanent status

Both strength and density affect power of the material - so sidgure is strong, but very light, making it less powerful than mithril. See how when you SOCM mithril sword into an octiron one, it drops in damage, because it is suddenly extremely light.
The Library of Attnam
Feb 13, 2018, 1:18 pm
#845
View profile Send message Find posts Find topics

In armor, you generally want material that is strong (for AV), light (for weight), and flexible (for penalties). You don't need that much flex, either: you can probably get away with flexibility of 5 without taking any penalties. High weight has no positive effect on armor, AFAIK.

In weapons there is a bit more to it. Strength is still important, of course, especially for light weapons like daggers, short swords, and spears which don't have all that much mainmaterialvolume to begin with (and thus are less effected by the mass of the main weapon material). Flexibility is pretty much irrelevant for anything except whips. Density comes into play with heavy weapons like maces, axes, halberds, and hammers. For any weapon, higher mass leads to both greater damage and lower accuracy/speed. But you still need a balance: a mace made of gold might be pretty and heavy, but it will also be horribly slow. It will do some damage, yes, but probably not as much as if your mace were made of steel. Arcanite and octiron make lousy mace materials due to their low weight, but they make excellent daggers, spears, and armor bits. Swords can go either way: the two-handers might benefit from a heavier material, but then you also run the risk of not being able to use them effectively.

Can pets follow you through the portals like they do when you descend stairs?
Booooooooooo!
Feb 17, 2018, 8:01 pm
#848
View profile Send message Find posts Find topics

SPOILER ALERT. Click here to see text.
Zap it at piles of items (I think corpses are excluded) and it turns into gold. Actually saved my ass once when I got leprosy in UT

SPOILER ALERT. Click here to see text.
I think it needs to be tweaked. I just checked it and it doenst work on walls or golems, or items being wielded by another monster. And when zapped at a metal chest it consumes the contents as well (unlike the wand of poly mechanic). I think it would be cooler if it worked on more items but had a chance to create a hostile golem as a balance. The increased functionality would make it a super desirable item. Maybe make it super rare or quest reward only as an offset.
Booooooooooo!