If you are Bloated with food, you can challenge him to a sumo fight by standing on the downstairs in his house and trying to go down. You are stripped of your equipment upon entering the fighting ring, therefore your natural stats must be trained, especially Arm Strength and Endurance. High skill at Unarmed Combat is also a plus. If you defeat him, you are awarded a Belt of Levitation and the Shirt with a Decos Banana Co. ad. Even if you lose the battle, you will not lose your life. You will be expelled from the ring and may try again later. 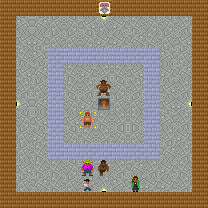 There are several different ways to beat the Sumo Wrestler.

It is also helpful to Haste yourself with a wand, so that you can move more quickly than him.