Attnam is a large town built around the Cathedral of Valpurus and ran by the High Priest Petrus.

Your first quest will see you deliver the encrypted scroll to Petrus and further quests can be started here. The town also has several shops, services and secrets.

Entrance to Attnam as seen in the World Map 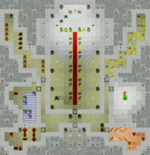 The Cathedral of Attnam as it appeared back in CVS.

There are also many farmers, hunters, housewives, children and light frogs, plus a polar bear and a floating eye.

History: This page contains historical information about IVAN that may not be implemented in the game.

Fiction: This page is a work of fiction by original developers

This historical piece of fiction was written in the early developement of the game, and thus might differ from the later lore. You might for example notice that Petrus once was called Perttu after one of the ddevelopers.

Attnam is a relatively small city located in a thick evergreen forest called Pertturia, where it acts as a capitol of the Holy Empire of Perttuania, that in turn controls all of the Isle of Perttuera and is the world's 324th biggest sovereign state. The city is physically quite isolated from the rest of the world, but the citizens don't mind it all since almost all of them have high speed net connections. The oceanic coast is quite near the border of the forest, however, and pilgrims wandering to the Cathedral and traders delivering goods, luxury items and dolphin food for the clergy class are not entirely uncommon in Attnam.

Nature is close in everyday life of Attnam, because civilization ends completely no further than at the city gate (if it has ever even begun) and wilderness takes over. The city guards are obligated to keep the area inside the city wall safe, but outside wolves, lynxes and wild bears may roam freely. Settlement of goblins, ogres and mutant school food mushrooms are also common. Even Enner Beasts have been heard wailing in the darkness that covers the forest, but they, of course, are killed with magic missiles if they ever wander closer than 500 yards to the city, in order to prevent structural damage caused in the city.

The citizens live mostly by hunting bears and such from the forest and whittling sacred-looking items from wood that foreigners that seek truth and Valpuri's blessing from Attnam buy eagerly as holy relics. The public expenditures of the state, e.g. salaries of Überpriestial elite guards, cost of the enormous amounts of sacramental Coke needed in the Cathedral and the price of replenishing Perttu's slave staff and harem monthly, are funded almost entirely by a state-owned valpurium mine located in the tundra section of Perttuera.

Attnam and the Empire of Perttuania are officially ruled by Valpuri the Great Frog and the King of Gods, but since He is quite often absent when decision are made, His Most Pious Überpriest acts as a messenger who delivers His orders to mortal men from godly planes. The Überpriest retains his position for his entire lifetime. When he dies, the next leader is chosen immediately by the Valpuristic Conclave of High Priests, and is almost always the one who killed the last Überpriest (although there seem to be some other, not so popularily known requirements for this crowning).

The former headquarters of the Empire were located up in the tundra area of Perttuera but were eaten by a swarm of angry polar bears in 913 Anno Valpurus. Attnam was founded in the next year, and, as can be well guessed by looking the map, its place was decided randomly by choosing the coordinates by dice-throwing.

The first building to rise in Attnam was the Cathedral, which yet today looms over the city as a symbol of Valpuri's might. The Überpriest of that day used much of his mighty magical abilities to aid the building process and to protect it from the attacks of wildeebeasts. So much that after the Cathedral and the city wall were finally up, he was easily beaten in duel by Perttu, the nowaday Überpriest. Perttu moved to the Cathedral immediately and started his reign by naming the country and all important landmarks (Attnam was not considered as such) inside its borders after himself. And during the following decades under his rule, Attnam has gradually become what it is today.