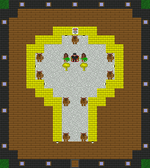 Richel Decos is the imperialist who runs New Attnam. He has cruelly enslaved the island's people to work for him supporting his banana exporting industry. He also kicked the priestess of Silva out of her temple and turned the temple into his own mansion.

Understandably, the village people despise him, although they are too fearful to revolt since he is a pretty powerful character and has many guards. You, however, can liberate the town by slaying him, his guards, and his slave driver.

Before this happens though, Richel sends you on your first task to go through the Underwater Tunnels and arrive at Attnam where you will deliver a letter to Petrus. If you succeed in this, you may consider returning to avenge the townspeople.

Richel Decos is one of the characters that will boost Charisma. Science Talking with Richel Decos requires 10 Intelligence and 15 Charisma (no Wisdom requirement.) Speaking with him will give a boost of approximately 1/2 Int and 1 Charisma.