Playing in .57, and with a slight slaughter of Tweraif and selling of their golden temple to the black market, I've got quite a selection of instruments, including two horns of plenty and two lyres of charming. I have thirty-ish charisma from selling lots of gold, and I want to tame everything I can. Most of the guards in Attnam and the black market are resistant to my charisma, but i already have four veteran guards charmed to my side and stopped a kamikaze dwarf by getting him one square from me and then charming him.
I've included a screenshot of my current stats, and any advice on how to proceed would be awesome.

Also, is there any list or way to see the taming difficulty of individual mobs? 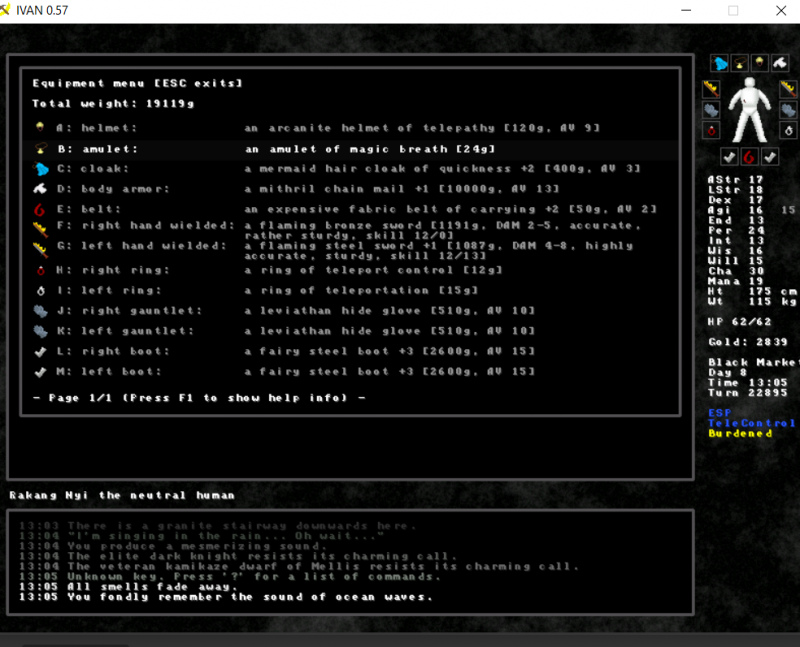 boneyman46 wrote
stopped a kamikaze dwarf by getting him one square from me and then charming him.
... holy shit

boneyman46 wrote
I've included a screenshot of my current stats, and any advice on how to proceed would be awesome.
Hm, the first thing I'd do is patch up those swords. With all that money, I'm sure you can buy a lot of supplies. I'd be happy to point you to / write out a detailed guide on this front if you like? But suffice to say, wands of cloning/mirroring and a lot of scrolls is your next step. Once your gear is ready to go, with all those slaves, and with more to come, you might consider trying to dive... maybe you can tame a powerful named enemy?

Quote
I'd be happy to point you to / write out a detailed guide on this front if you like
, yes please.

Some additional things i found out:
Horn of healing affects your allies in at least a two tile radius, and heals them fully just like you.
And its an unbreakable infinite full hp restore that takes one turn to apply, and is awesome
The horn of fear applies panic, and from what i can find it doesn't go against any stat check, just checking for immunity. Neither Sherarax nor Elpuri nor Oree have that, meaning you can just wail on them with higher agility or zap them from range without taking hits if you can get them within one tile and before they attack, apply the horn of fear.

Quote
maybe you can tame a powerful named enemy?
Some uniques cant be tamed. Genetrix Vesana cant be even with a wand of resurrection, and neither can Shererax from the wiki page

OK: Rather than dig around for a general guide, here's a guide tailored in some places for your character in particular. Warning: It's long. But, the concepts here are pretty applicable to any future character you may make as well.

Your first step is going to be to acquire some items: a lot of scrolls and a few wands. In particular, you need at least a few scrolls of Change Material, Harden Material, and some scrolls of enchant *foo* won't be amiss either. Scrolls of charging will also be handy. Next, you need some wands of cloning. Mirroring will also do in a pinch. Also, it would probably be a good idea to hoard up some holy books. It doesn't matter which god, but don't read them before you're ready if you aren't aligned close to them. Reading a bunch of Holy Books of Valpurus will really ruin your relationship with Cruentus.

As for where you can get these items, you have a few options. With all that gold, your first stop should be the shops in Attnam and the GC. (Possibly the Black Market too? I don't know, I haven't been there yet, I haven't played a lot of 0.57 yet...) Buy up their stocks on the relevant items. You may also have found a few things in the dungeons; that's probably where any wands you have will be found. Your last option is to use a pick axe and a wand of polymorph. Dig up a bunch of stones, then make a row of 5 stacks on the ground. Each stack should have 5 items in it. What the items are doesn't matter, so use stones, bones, sticks, broken bottles, empty cans, leather helmets, whatever garbage you've got. Stand at one end and zap your wand at the row! The top five items in each of the first five squares in that direction will permanently transform into something else. This can help you get the books/scrolls/wands you need, and sometimes you can even find better gear! Keep your eyes out for gauntlets of dexterity / boots of agility in particular. If you can get a pair of each, that will help

Also handy would be a Helmet of Brilliance as this boosts your intelligence (useful for step 4.), named weapons, and belts of levitation.

It goes without saying, but try not to lose any of your scrolls/books/wands at this step. I recommend keeping a locked chest somewhere where you stash things.

For the second step, you need to do something about that terrible Int score. Read all of your holy books. If you're lawful, pray to Sophos. Read disposable scrolls. Then, do some science talking to train it higher. You're going to want an absolute minimum of 15 int, but if you can get it to 25 or higher you'll have much better results. This may take a while.

Now we go to work. I recommend you read this entire section, and the section following, before you start applying it. Find yourself somewhere secluded. You don't want to be bothered while you're doing this. I recommend finding a room in Attnam where you can lock the door. Make a stack of 5 scrolls - I would recommend prioritizing scrolls of Change Material and Harden Material first. Zap them (from close range - a neighboring tile) with a wand of cloning. These clones are permanent, and can be cloned further, so go back and re-sort your pile between zaps to make sure you're getting what you want. You will never need to use more than 8 SoCM for a single equipment set. Since we'll probably be using mirrored scrolls, this means you probably can get by with having four real ones (through cloning/collecting). You'll need at least the same number of SoHM, but having spares here might come in handy since your Int will rise further as we start reading scrolls. Get as many SoEW and SoEA as you like. In any case, since both WoM and WoC can only affect 5 items at a time, you can use any excess (i.e. more than 5) cloned SoH/CM. Hold onto the extra SoE* for now though.

This next part is a little time-sensitive... but not terribly so. Following the same method as we did for cloning, start mirroring scrolls. Use the mirrors between each zap. (They'll be the ones lower down in the pick-up list.) These mirrors have the full effect of the standard scrolls (excepting the SoE*, which are less likely to successfully enchant past +5). However, they are not permanent as items - if you don't read them soon enough, they will vanish. I'm not sure on the time limit here, but I would just read them ASAP to be safe. I'll get to how you're using these scrolls in a moment.

A note on scrolls of Charging: These cannot be cloned or mirrored, so don't bother trying. Use them in this step to get extra wand zaps. It's a bit of a tossup whether to use them on WoC or WoM; I usually go with the wand of Mirroring, since you get more zaps out of the scroll that way. This is especially the case for SoHM and SoCM, as there is no functional difference for these scrolls, between a mirror and a clone.

You can also wring one last charge out of your WoMs, if you need/want to. Dump everything you own in a corner somewhere, wield a scroll in each hand, grab the empty wand and stand directly on top of your stack of 5 scrolls. Break the WoM. You'll duplicate everything in the pile, as well as mirror yourself and the two wielded scrolls. You can then dispose of your mirror however you like, after taking his scrolls.

Using your scrolls: You're goal here is to power up your gear. This comes in two steps: improving the material and enchanting it. This table has all the information about all the materials, including their Int requirement and what they harden into. Note that this is the required intelligence to create the material from scratch, as in, use a SoCM to turn an item into that material. If you use a SoHM, the requirement is reduced by 5. So, lets take your bronze flaming sword as an example. You can immediately Harden that into deep bronze (required Int 9). If you gain one Int point (bringing it to 14), you can then Harden the deep bronze into djinni brass (required Int 19). On the other hand, if you want to Change it into Mithril, however, you'll need an Int of 26! Luckily you can work around this in a way: with 21 Int, you can Change to Fairy Steel, and then Harden to Mithril.

Choosing the best material to go for here will be tricky, and will be heavily dependent on your Int and how many scrolls you have. Good options for the swords, body armor, helmet would be Hepatizon (from Bronze, with 23 Int and 2-3 SoHM), Ukku Steel (from Steel, with 25 Int and two SoHM), or Mithril/Galvorn (one SoCM and one SoHM for each sword, Int 21 and 26 respectively). Boots, gauntlets, belt, cloak should probably be flexible materials, although really you can go either way for the boots and gauntlets if you can get a good material. Good flexible options are Troll Wool (int requirement 26), Wyvern Hide (int 2

, Phoenix Feather (int requirement 20), Kraken Hide (int requirement 30). I will note that your existing Leviathan Hide gloves are already top-tier flexible materials, and the Fairy Steel boots can harden directly to Mithril with only 21 int. So, if you didn't replace your gauntlets and boots back in step one, you don't need to do much to these. The mermaid hair cloak can be hardened up to Kraken hide with 25 int and a handful of SoHM.

Once you're satisfied with your gear and their materials, go to town with Scrolls of Enchant *foo*! Use mirrored scrolls first, to bring everything up to +5. All SoE* are guaranteed to work up to that level. Past this, there is an increasing % change the enchantment will fail; this failure chance is higher for mirrored scrolls. Keep enchanting things until you run out of scrolls; you may consider hanging on to five each of SoEA and SoEW, in case you find another wand down the line.\

Finally: Dive dive dive! If you've gotten this far you should have some pretty incredible gear. Combined with your pets - and your ability to make more - you're probably pretty set. Your resistances are a definite weakness, I would consider wearing rings of fire resistance permanently and swapping them for rings of lightning resistance if you run into Izzy. The ring of tele control will be handy for the mystic dark frog, though.

boneyman46 wrote
stopped a kamikaze dwarf by getting him one square from me and then charming him
That's pretty badass!

And horn of healing is strong. There's a reason why it's rare, very heavy and has a long cooldown.