From IvanWiki
Jump to: navigation, search

"You see here a crumbling pyramid."

This dungeon only appears on your map after you receive a relevant quest from Myrddin Wyllt. It has several levels with many coffins and a maze of twisting little sandstone hallways all alike. 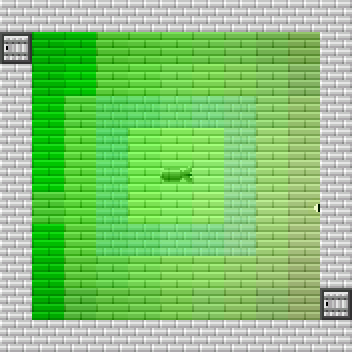 The room housing the thaumic bomb.

The floors and walls are made of supercrete and there is a large room especially for housing the bomb with lead walls and an inner glass chamber. Several mind worm boils are trapped within cages of Stainless Steel bars as psionic 'guard dogs'. They can be seen but not (easily) hit through their cages and getting to the bomb will put you within range of at least one of them. Without a specific kind of helmet, they can kill even a strong character.

Getting into the bomb vault itself isn't hard as the outer door locks aren't a rare type nor are the walls very strong. Getting the bomb OUT is harder, as it weighs a whopping 100001g and cannot be changed into a lighter material. A Leg Strength of at least 41 is required to pick it up without being Burdened, though much lower strength suffices to carry the bomb while Stressed. Although you can pick the bomb up and successively teleport with it to the staircase even when Overloaded, you must actually be able carry it out of the dungeon.

There are multiple ways to mitigate the prohibitive weight of the bomb as you try to get it out of the Pyramid:

As noted above, you can teleport with the bmob even when Overloaded, but this won't help you on the worldmap.