An enchanted obsidian stone weighing 240g that is the objective of the quest given by Senex.

Finding it at the bottom of the Fungal Cave and defeating Sieni Fusanga are only half the battle since the stone is in the middle of a small underground lake. If you have gained the Swimming status from a fountain, this is no problem. Otherwise a wand or ring of Polymorph can easily change you into a flying/ethereal/swimming creature to grab it - but be careful about transforming into a weak creature around strong enemies. The belt of levitation from defeating Huang Ming Pong will also work, but you can instantly drown if it is broken or removed. You can also zap it with a Wand of Teleportation and then search the level to find where it landed.

The stone's magical abilities are not merely stated - it will occasionally "release torrential rain" in an area around you. Being inundated with water shouldn't be any problem unless you or your allies have equipment prone to rusting. It may even be worth carrying around the shard as a portable 'fire extinguisher'! 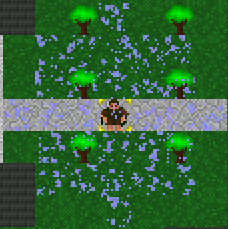