Search Results
Searched for posts by wizard44 in all forums

Ischaldirh: I think this information should be added to the wiki if it has not already.

Fejoa: I don't have a blog, so I do not imagine that I will be doing such a compilation.

Anyway, since the unanimous vote is to go to Sil, that is where I will head next. If you are interested in following my journey there, below is the link to the thread:

So my fourth and final character died in one of the goriest ways possible, which brings my time with this game to an end. And with that comes my perspective on playing the game.

I like the idea of limbs having their own HP, which is certainly how IVAN stands out with other roguelikes. However, it makes checking the character’s overall status counterintuitive, since you can’t just look at your own HP alone. I know that there are indicators on how each limb is doing, health-wise, but I really wish that I could see the *exact* HP that each body part has just so I can gauge exactly how much I am in danger in one time.

Another problem is that some clouds of raw magic are barely visible, and I end up mistakenly walking into them when fighting magic mushrooms. I know that the varying degrees of visibility is supposed to measure how thick these clouds are and how close they are to being dissipated, but I think the visibility of these clouds should be more obvious.

One other important opinion is that I think food rots far too fast in this game for my liking. When I was eating a group of 7 bananas that I just bought from the New Attnam store, I found that about 2 of these bananas has already gotten to the slightly spoiled stage. I also think that the corpses and food items don’t really give enough nutrition, as I was often forced to make several trips to the New Attnam store. On that note, I feel that the player gets exhausted far too easily. Even when I stop to take a rest, the exhaustion doesn’t seem to really go away.

And finally, I think there should be a way to remove scars from the player character, since getting scars on the arms just permanently decrease arm strength in a way that will handicap the player’s progress by too much of a degree for overall survival. It doesn’t need to be common, but I think a scar removal item (like royal jelly in ADOM) would be beneficial. And when I drank a healing vial in an attempt to regrow my limbs, I thought that would be enough to get at least one limb back, given the overall rarity that these potions seem to have.

So in conclusion, I think the game is pretty good, but it does have its flaws that make the learning curve a tad too difficult for some players to enjoy. My overall progress in the game, however, falls squarely on the Poor category, since I only reached the gloomy caves once. I would like to thank all of you for giving me tips and support for playing the levels. The community is certainly a great one to get involved in, and I wish you all the best of luck in the future.

As a final show of appreciation, I will allow you to select the next game that I should play in my roguelike tour of duty. The choices are as follows:

Which game do you think I should tackle next, and do you have any input on how to survive on these two games?
Posted by wizard44, Nov 6, 2019 at 1:35 pm
Complete N00b's Journey Character #4: Itat Quao in forum General IVAN Discussion
Thanks for the input everyone. Unfortunately, I get killed due to a snowballing series of unlucky events, which brings my journey here to an end.

YASD #4: Hunger, stupidity and losing my limbs bring an end to my experience.

Read the large and mysterious saga of the pantheon, changed my gauntlets to the leather ones, and dual wielded the dagger and the whip. I then went down to the third floor of the underwater tunnels, where a door trap destroys my holy book of Seges (stupid me for not putting it away) and I suddenly get very hungry, forcing me to use all my remaining gold at the New Attnam shop to satisfy my hunger. I then find a wolf, who chops off my left arm and left leg. With no gold to reattach my limbs, I find myself a sitting duck and quickly die to a giant frog. So this ends my IVAN experience. I will shortly be providing a review in the main thread.
Posted by wizard44, Nov 5, 2019 at 6:21 pm
Complete N00b's Journey: The Series in forum General IVAN Discussion
Alright, so for this fourth and final try, I’m being super careful all of the way. I generated a character by the name of Itat Quao, and although there were some tense moments, this one has made it past the first two levels of the underwater tunnels. The thread for this last character is below:

https://attnam.com/topics/Complete-N00b-s-Journey-Character-...
Posted by wizard44, Nov 5, 2019 at 6:20 pm
Complete N00b's Journey Character #4: Itat Quao in forum General IVAN Discussion
Introduction: This is the fourth and final character in progress in the series called the "Complete N00b's Journey", where I attempt to see how far I get each time despite my n00bish mistakes. This character has finished the first two levels of the underwater tunnels, so I am now starting a thread for this character as a celebration and to track his further progress. As a reminder for this series, the number before the hyphen signifies the attempt that I am playing, and the number after the hyphen signifies the goal that I have finished. With that, I bring you:

I nearly lose my life to a kobold’s critical hit on the first floor of the underwater tunnels, but manage to retreat and heal up. I manage to make it to the second floor of the underwater tunnels, where I find an altar to Infuscor, an amulet of ESP, a verdigris chain mail, and a malachite helmet of attractivity. A veteran dark knight (which is polymorphed) spoils the fun and forces me to use a potion of healing to survive the encounter. I then find a wand of mirroring and get myself blown by a booby-trapped door, which causes my scrolls of teleportation to catch on fire. I finish the level without too much trouble, although magic mushrooms are a large annoyance to deal with.

The next goal is to just clear the underwater tunnels. I'm forgoing Huang Ming Pong since I somehow can't get the exploity tricks for beating him to work.

Should I stick to Infuscor as my god to pray, or wait until I find another god's altar?

I heard that a whip of thievery is a good weapon. Should I equip it, and how long should I keep it for?

Which is better: My pig iron gauntlets or the pair of leather gauntlets?

I left a leather armor (av 2) in a stash somewhere in this level … is that a better armor to put on?

The attached pictures show the character's current status and inventory.

Any tips to improve this character's survival on the journey to Attam are appreciated. 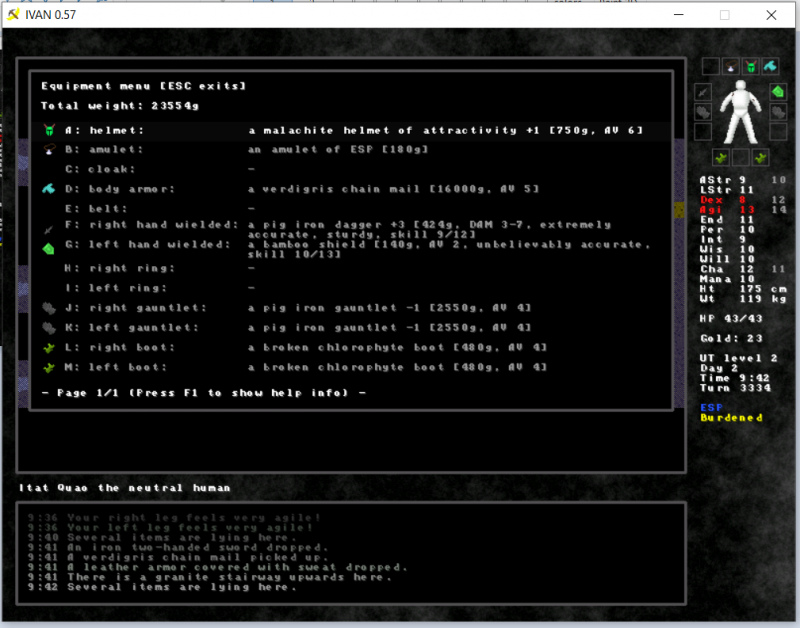 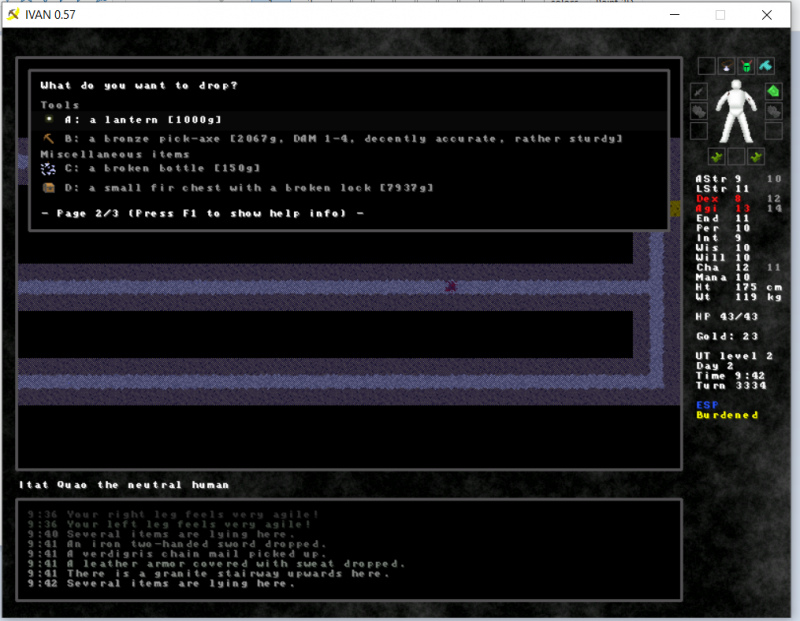 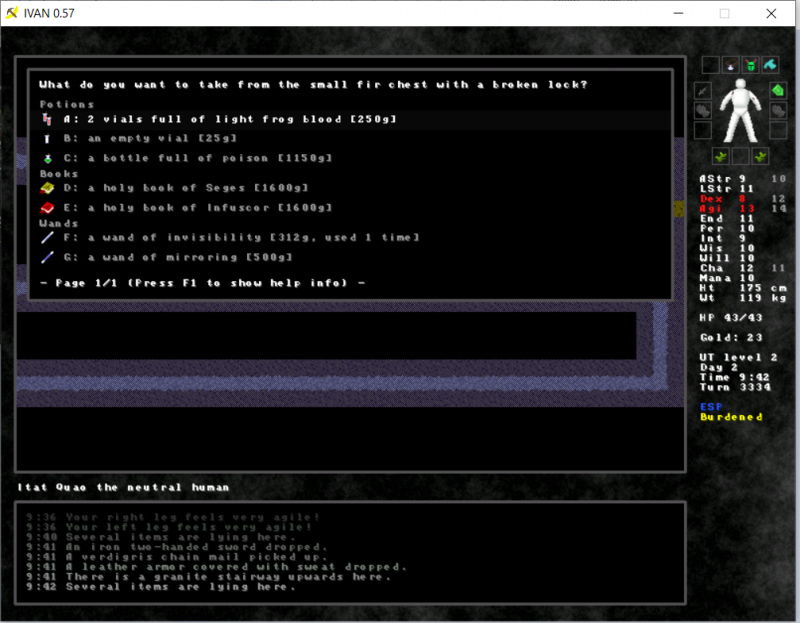 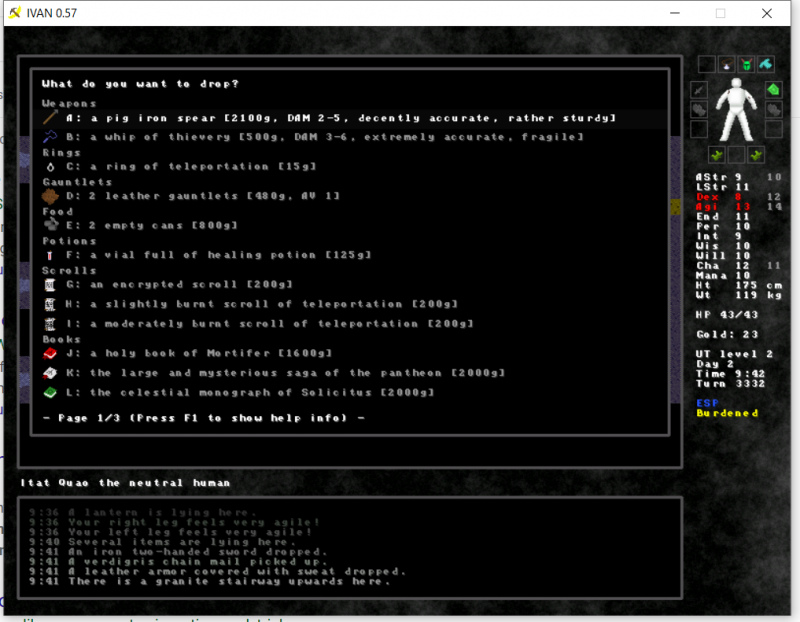 Posted by wizard44, Nov 5, 2019 at 2:12 pm
Complete N00b's Journey: The Series in forum General IVAN Discussion
Second character bit the dust as well, so now it’s on to the third character, who has randomly been giving the name Skelroth Honoe. Unfortunately, this character had the lifespan of a mosquito and got killed on the first level of the underwater tunnels by a zombie.

YASD #3: Who knew zombies could be so fast?

So I almost clear the first level of the underwater tunnels, but a zombie does a number on me with critical hits and kills me before I can retreat back upstairs. So there’s only one try left. After that, my journey will come to an end and I will post my overall experience in this thread. Call it a review of some sorts. My prediction is that my last character won’t make it past the first level of the Gloomy Caves, which would rate my performance a solidly Poor one, based on how many levels that need to be “cleared” to receive the standard “freedom ending".

What is the roadmap that you guys follow to get a standard freedom ending? I know that some of you guys have posted helpful advice to carry out for some landmarks, but I would highly appreciate the mindset that you guys get into when starting a run.
Posted by wizard44, Nov 5, 2019 at 12:48 am
Complete N00b's Journey Character #2: Tongha Ghae in forum General IVAN Discussion
Thanks for the input everyone. I end up being killed, however, by attempting to taste a vial of healing potion upon being wounded, which apparently can be interrupted by a monster's attacks.

YASD #2: A misunderstanding about how tasting potions works.

So this death was, as predicted rather quick and short. I run into a concrete golem, and attempt to taste a healing potion vial to recover. However, the concrete golem's attacks interrupt me and kill me in the torso in two quick successive blows. That was seriously an anticlimactic ending. So now I am at my third character, which will start tomorrow.
Posted by wizard44, Nov 4, 2019 at 10:42 pm
Complete N00b's Journey Character #2: Tongha Ghae in forum General IVAN Discussion
Thanks for the input folks. So the character’s technically alive, but in pretty bad condition.

I find altars to Sophos and Legifer, and find Genetrix Vesna. I throw a grenade of mustard gas, which does not seem to be effective, and then throw my two potions of posion at Genetrix, both of which miss. I then say what the heck and rush head on against it with my axe. She and her plant posse goes down with grace and I then proceed to sell a lot of gear to the Attam shopkeeper. I then try to lure Huang Ming Pong off his spot, but the plan didn’t work, as he didn’t get off his spot to get the banana path that I laid outside. I try to fight him the normal way several times, but that strategy proved ineffective. In my attempt to tame one of the elite guards of Attram, I accidentally tame the court jester with my sole scroll of taming. That was dumb of me, since I did not get the memo that the elite guard taming trick was removed. So with almost no food (and the food store in New Attam cleared out), and with low gold, I end the part feeling very bad off.

The next goal is to finish the first four levels of the gloomy caves, but I don’t know. This character might honestly be just plain screwed.

How does luring Huang Ming Pong work? He didn’t go after the bananas that I dropped off outside his house. And what stats do you need to beat Huang Ming Pong in the first place?

Other than that, I don’t have any questions, as I fully expect to get killed while trying to finish this goal due to my cumulative screw-ups. Below are the pictures of the character's stats and equipment. 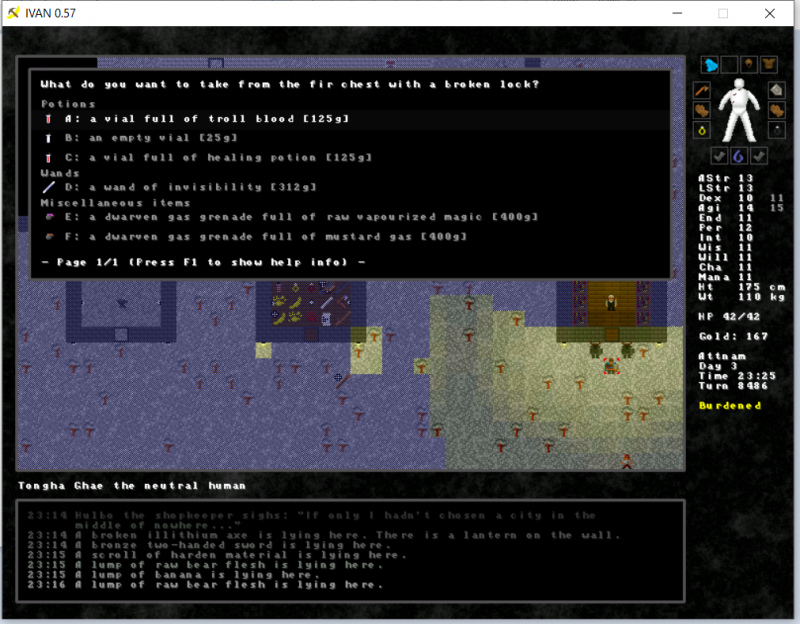 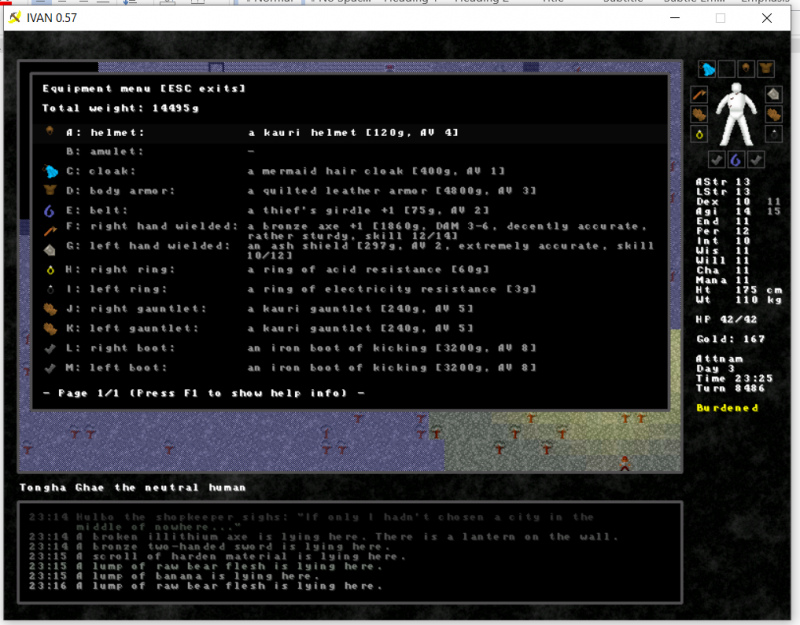 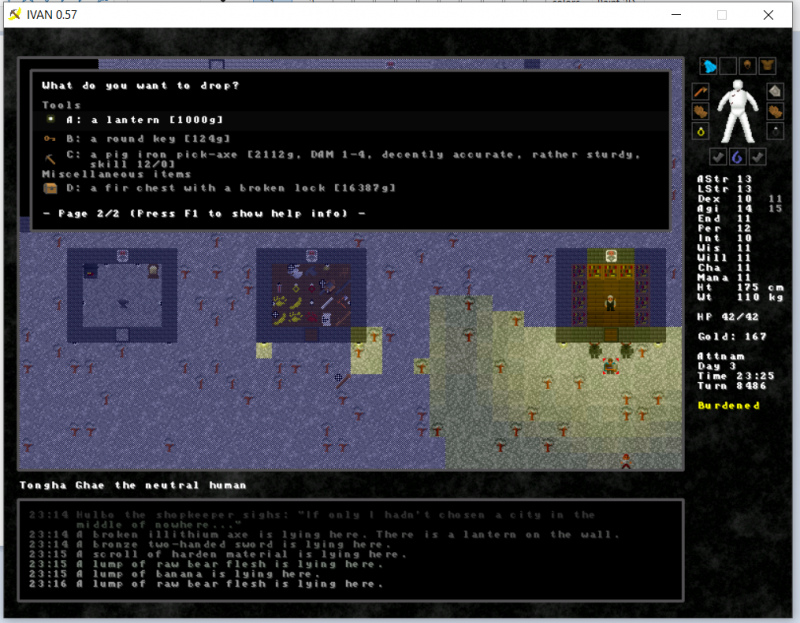 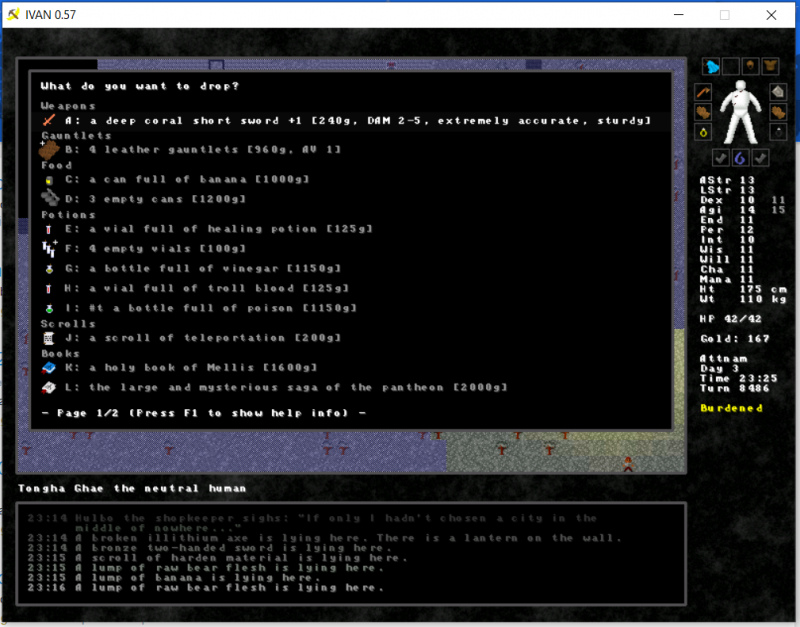 Posted by wizard44, Nov 4, 2019 at 4:08 pm
Complete N00b's Journey Character #1: Tonris Enoe in forum General IVAN Discussion
Thank you so much for the tips red_kangaroo and capristo. Really helpful in getting me oriented. So that is the end for this character, but I have moved on to my second character. As a reminder, there will only be four tries at most before I write my comprehensive review for this game. So far, the mechanics are rather nice for the most part, but only time will tell if this is a game for me.