Search Results
Searched for posts by red_kangaroo in all forums

Showing results 71 - 80 out of 639 total
Modify your search
Posted by red_kangaroo, Jan 20, 2020 at 1:04 pm
Aslona in forum IVAN Development
stoovan wrote
I haven't had a completed run yet through out my entire time playing. Though I hope that doesn't stop me from having my thoughts on what I experienced so far with this beta.
No worries, I also have only a precious few wins in IVAN.

stoovan wrote
First off, I ain't sure if it's just me but the game sure got allot more harder then usual.
That's really just bad luck.

Nothing was changed in UT, but sometimes the game just feels as if it's out for blood. Jenny can be pretty dangerous when she lands a crit.


stoovan wrote
Though I haven't gotten that far besides the pyramid, I feel like the new quest is great so far! It adds allot more options to the already good amount of different places to go to. My only problem was when I was trying to find the pyramid after leaving Aslona. I assumed it was outside the island I'm on since I'm given a ship which allows you to go to other islands that you would originally couldn't access (I also found out today that the world map is allot more bigger then I expected). I had two runs where I starved to death trying to find the pyramid. Like I said though, the game is meant to be hard so I can't really say much.

I would advise to start with the quests in goblin fort or fungal caves. Myrddin even says in his quest speech that pyramid is the most dangerous of the new dungeons.

Yeah, the dungeons unfortunately can sometimes end up rather far from each other. That's also the reason why you get a boat, I couldn't figure out how to nicely pack that all onto a single continent. But when looking for a dungeon, you should generally first (l)ook for it and only get going once you know where to. Otherwise you waste too much nutrition on the worldmap.


stoovan wrote
One thing that I hate though is upon getting at least one leg severed (which for some reason is very easy to happen in later places), I end up getting overloaded even if I don't have that much in my inventory.
Your leg strength gets cut in half when you loose a leg, thus you being suddenly burdened/overloaded. Good boots help prevent loosing a leg, and I always try to have a source of teleportation in my open inventory to get out of trouble immediately should I loose a limb.

Everything was normal until about halfway down the fungal caves, when Loricatus gave me an angel and I decided to dive quickly to take advantage of her before she disappears. She destroyed Fusanga and even killed the dark mage on the last level, even though here I was very lucky to be wearing an amulet of life saving, because he got me before she could reach him.

But when I was recuperating, suddenly my brain was constantly on fire and mind worms started to appear everywhere. I had some healing potion from Mellis, so I survived, but with no tin helmet, I had to hightail it out of there.

I went to the goblin fort, and once again mind worms started to appear. It was an utter infestation, and I still didn't have any tin helmet. I ended up retreating to UT, doing the spider quest for a scroll of wishing, and getting a SOCM to get a full tin helmet. Then I finished fungal caves and went down through the goblin fort, killing mind worms left and right. Have a look at the kill list!

Unfortunately, on the last level of GF, I managed to nick prince Artorius with an explosion, making him hostile. No problem, I had a wand of resurrection, so I killed him and revived him friendly once again.

Except because he was made hostile, so were both Castle of Aslona and rebel camp (which is a bug I'll fix, they should be OK if you bring the prince in one piece).

I tried to take on Lord Regent, and well... 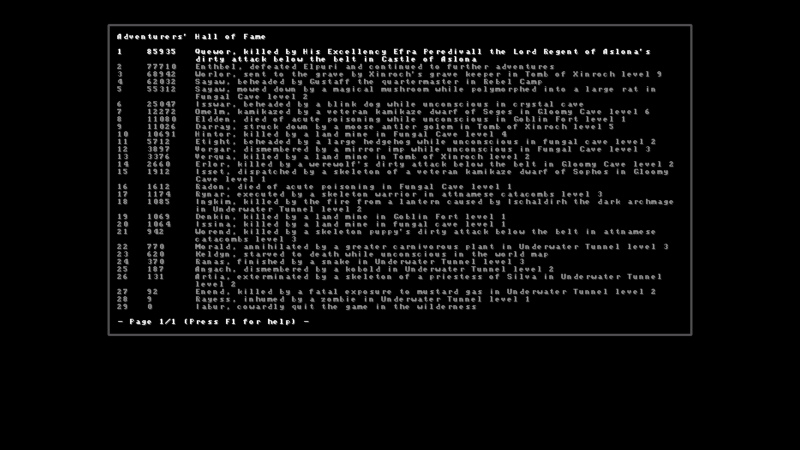 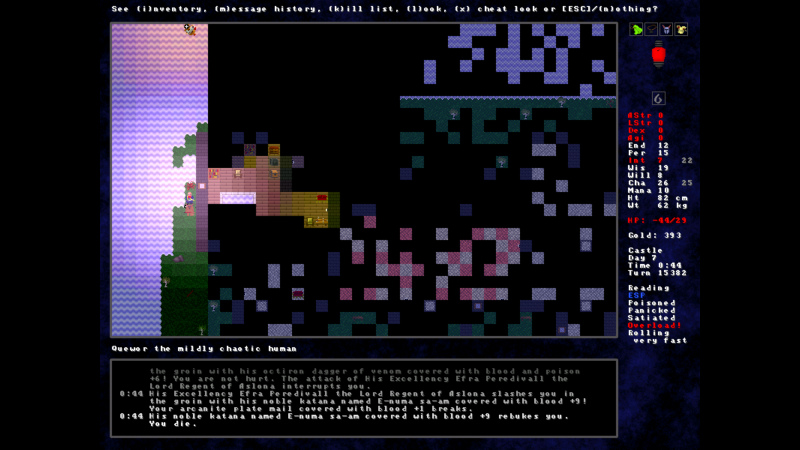 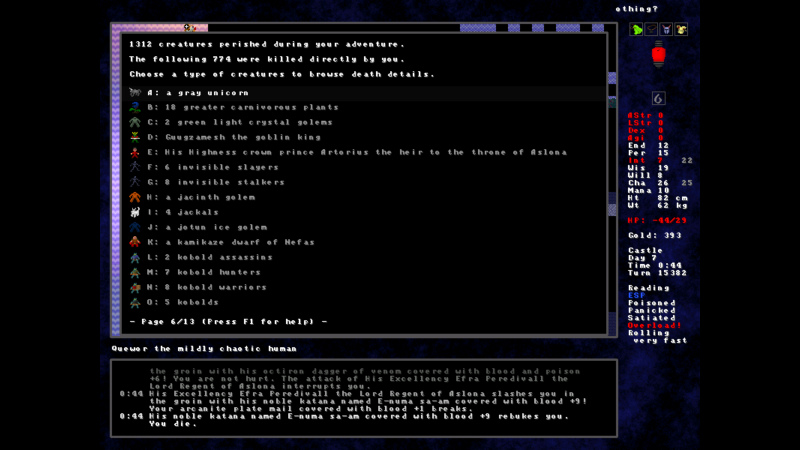 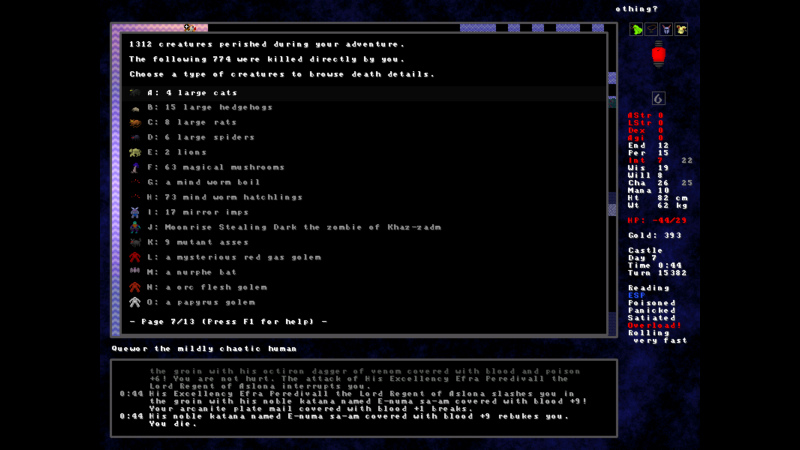 Posted by red_kangaroo, Jan 10, 2020 at 12:37 pm
score multiplier ending question in forum Tips, Tricks, and Secrets
I think mutually exclusive quests add replayability and allow balancing. If you could access everything, especially with end-game character, you would completely break balance. Right now, the game is rather tightly balanced, and you can see on CLIVAN what happens when you start adding new areas without restrictions.

You can always play in wizmode without using the special features if you want to do have access to everything at once.

Posted by red_kangaroo, Jan 9, 2020 at 9:57 am
score multiplier ending question in forum Tips, Tricks, and Secrets
fejoa wrote
No I don't think they stack unfortunately. They should though. I think that would be cool.
That would be pretty cool. I'd suggest cumulative rather than multiplicative (ie. x2 + x2 = x3, not x4) stacking, though, or stacking two "easy" victories will beat getting only one hard victory.
Posted by red_kangaroo, Jan 2, 2020 at 5:08 am
Aslona in forum IVAN Development
Sorry about the wait, I'm back and here is the test release. I'd like to hear about any bugs or balance issues.

That Travis auto-release thingy is really great!
Posted by red_kangaroo, Dec 27, 2019 at 2:44 pm
Aslona in forum IVAN Development
fejoa wrote
to fix
Oops, now it should be working OK.


fejoa wrote
Also, you should be able to build your own windows build on your personal fork by creating, for example, a release branch, and building "manually" on Travis (i.e. log on and press the button)
or even changing the yaml file to tickle up your own containers on Travis. That's how I drafted the build system without working on the live repository

Any build artifacts will just appear in the red-kangaroo/ivan releases page.
Hm, I was able to trigger a build on Travis for red-kangaroo/ivan branch Aslona_travis_release, it built successfully, but I'm not sure if it created a release. I'll have to see the docs. Thanks about the info.

Notable change was to stop new quests from always requiring the dev to deal with the encrypted scroll, so now you always need to talk to Petrus first to give him the scroll, and then you can choose to talk to other quest givers for new quest. To activate GC, just talk to Petrus again; talk to the necromancer for TX and to Sir Lancelyn for Aslona quest.

Some notes on Aslona that you might or might not want to discover on your own:
SPOILER ALERT. Click here to see text.
* There are multiple dungeons available, so don't be shy to try a different one if you encounter a hard situation/enemy, and come back later.
* Pyramid should probably be done last.
* There are some new, nasty enemies. Don't melee nurphe bats.
* You can sail over worldmap oceans once you accept the Aslona quest. You might need it to find all dungeons.
* For best-scored victory, choose one side of the civil war and give all quest items to that side.
* You can still win even if you anger both the royalists and the rebels.


See NEWS for more details on all changes.

fejoa, could I ask you for a Windows build, please, so it can be properly tested by everyone?

Posted by red_kangaroo, Dec 24, 2019 at 8:54 am
Banana shot in forum Tips, Tricks, and Secrets
I wanted to finish Aslona for the Christmas holidays, but I'm a few dialogues short. :/
Posted by red_kangaroo, Nov 20, 2019 at 2:04 am
anything relating to ivan you're too lazy to create a new topic for in forum Tips, Tricks, and Secrets
stoovan wrote
Any tips on how to survive the crystal caves? Do I need any specific armor, weapons or items that would be of any help?
Also invisibility is good, because the crystal golems cannot see invisible and you can just run around them.

If you can pray to Nefas, wait until you have a mistress or two and let them handle the majority of the enemies.