Search Results
Searched for posts by badbeaver in all forums

Showing results 1 - 10 out of 143 total
Modify your search
Posted by badbeaver, Jan 6 at 1:28 pm
Ideas in forum Suggestions and Ideas
Yeah I get it, but still
Posted by badbeaver, Jan 6 at 3:36 am
Ideas in forum Suggestions and Ideas
Weight of limbs must impact encumbrance. If an arm is connected to your body, then it weighs 0, but if it is cut off and you pick it up then it has weight. I know that they are easier to carry when they are attached to you, so maybe only half weight must be added? It doesn't really matter with natural limbs, but having 2 iron arms with no weight penalty is unrealistic.
Posted by badbeaver, Dec 16, 2020 at 8:02 am
Flames in forum IVAN Development
wait you can dip limbs into water?
Posted by badbeaver, Oct 5, 2020 at 8:20 am
Overloaded fighting in forum IVAN Development
Yup, it really sucks when you have been going back from a long trip into town to sell stuff when a monster crits one of your legs and you have to spend a lot of time dropping items
Posted by badbeaver, Aug 7, 2020 at 9:46 pm
anything relating to ivan you're too lazy to create a new topic for in forum Tips, Tricks, and Secrets
So, it turns out, that if you sever a skeleton's limb when there is a dog/jackal nearby, the animal is going to eat it and become tame, didn't know it worked that way. 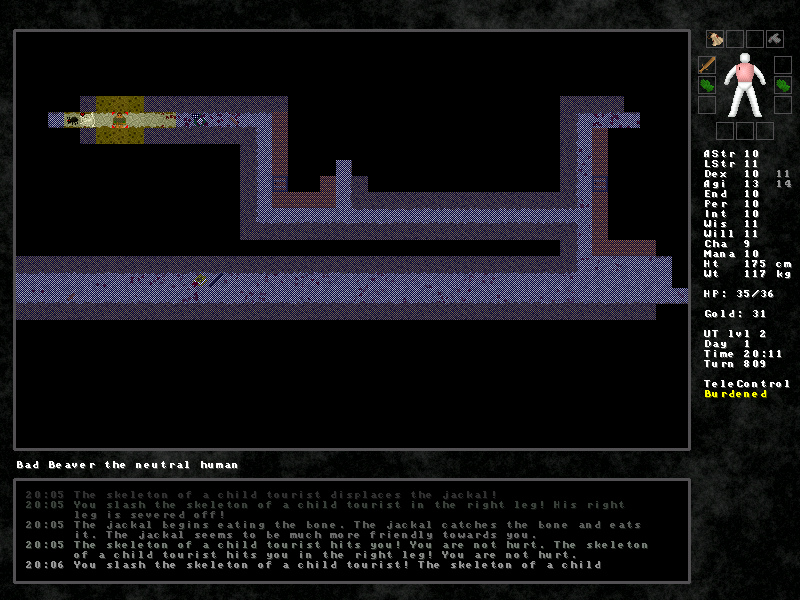 When wrestling is added in IVAN, sure, but it doesn't have that. The system is much simpler.


TheMasterGear wrote
So wouldn't duel wielding two weapons double your damage output?
You don't see people duel wield handguns, melee weapons while they're not nearly as precise as guns, they wouldn't be just twice as effective as using one weapon in two hands.

It does, I think. At least it is very effective. A lategame IVAN character usually has insane dex, so why wouldn't an extremely dexterous person be able to use two weapons effectively? Even in the real world people used two weapons, to have more combat flexibility and to be able to parry much better. The damage and STR isn't everything.


TheMasterGear wrote
Though I'm sure if you had super strength, using a weapon would still help with piercing damage or range. You would just break the weapon really fast as the drawback; thus you'd want a tough weapon like a mace or a club.

STR already influences weapons enough, I don't think there is any need to complicate it. Weapon breaking according to STR could lead to unplayable games, as some characters reach >400 STR with artificial limbs

Posted by badbeaver, Apr 8, 2020 at 1:59 pm
Arm strength for two handing vs one handing in forum Suggestions and Ideas
TheMasterGear wrote
I also thought that one-handed weapons should be made into two-handed weapons because you can put both your hands over each other on the grip.

Dual wielding one-handed weapons is, well, kind of silly - handles on one handed weapons aren't designed to be used with two hands. Try to use a knife with both hands. And they don't generally require much strength to use, so what's the point anyway?


TheMasterGear wrote
Edit: The main problem is duel welding. Only the most gifted of ambidextrous would be skilled enough to attack twice as fast when dueling vs using one weapon. Unless that's not the case in Ivan?

Only dexterity influences attack speed. As far as I know, if you double-wield, weapons attack just as quickly as they usually would if you one-handed them.