Showing results 21 - 30 out of 273 total
Modify your search
Posted by JoKe, Dec 27, 2017 at 3:33 am
Bug Reports in forum IVAN Development
Couple of things, not necessarily specific to current release:
1) Apple came across a new exploit: challenging Huang into a fight while wearing an AoGH does not update current health to match the new maximum when equipment is removed. This leads to silly situations like 127 / 54 HP.
2) The top of the screen gets cut off on Win10, which means any prompts on the top of the screen are not shown i.e. y/n for quitting and saving, engraving etc. Image below is from .508, this also occurs on .507, .509 and .51. Latest working release is .506. 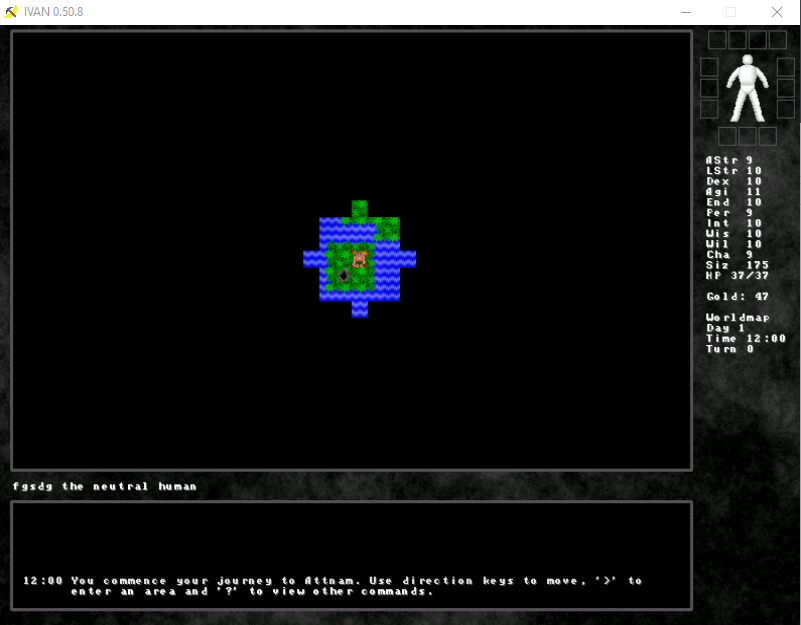 Posted by JoKe, Nov 2, 2017 at 12:29 pm
Ideas in forum Suggestions and Ideas
This blog post was an interesting read a while back regarding LOS in roguelikes. I don't personally have any problems with the current implementation, even if corners do often stay unrevealed. It's very rare for anything worth noting to be in a corner wall anyways.
Posted by JoKe, Sep 28, 2017 at 12:02 am
Testing build in forum IVAN Development
There is no competition between levitation and stat boosts, as they're both useful in two completely different circumstances. Minor stat boosts do not help the player with exploration like utility belts do and vice versa for combat, so it makes sense for the player to find a belt for both situations. Nothing forces a player to only choose one belt and ignore all of the others. Especially so when the levitation belt is practically guaranteed for most runs.

That being said, I do agree levitation and carrying both win out against stat boosts in how interesting the effects are. Having a number go up a bit is just dull, regardless of whether it's optimal for the situation or not.


Batman? wrote
unbreathing should negate the insta-death for drowning, if thats possible in the current setup.
By that note, unbreathing might also enable swimming / slowly walking across the sea floor.
Posted by JoKe, Sep 26, 2017 at 10:12 am
Testing build in forum IVAN Development
chaostrom wrote
I get where you're going with this, and in fact I am all for having a greater variety of equipment choices, but given these points why would you pick one of these when you can have levitation?
Levitation does not provide straight up combat effectiveness like stat boosts do, even if negligible. I'm personally more worried that stat belts will generate unnecessary micromanagement via belt swapping for fights vs safe exploration.

Regarding the rest of the changes:
Willpower helmet fits in with INT, WIS & PER well enough if and when willpower is made more useful. Until then, misleading players with a useless effect feels rather awkward. The ESP helmet could be neat! Currently the arguably optimal route is to go ESP amulet with a helmet brilliance for that juicy synergy, so providing a viable choice for the helmet is welcome. Teleportitis helmets are not going to be optimal by any means (random teleportation rarely occurs when needed), but could still be used instead of vanilla headgear with telecontrol. The helmet of Maclua is still another choice for the player even if I'd personally still prefer the INT helmet + ESP amulet.

The amulet additions are fine as is I feel. There isn't currently much competition for an AoLS for combat against visible foes and ESP for general use. One thing I do have to point out: I highly doubt any player will be able to find an amulet that's only wishable. Perishable amulets are an interesting idea, but they do need to be able to be found without spending wishes.

Rings of light would be great! Even if they're not really worth an equipment slot when light crystals exist, additional interesting permanent light sources would be lovely.

Artifact shields should provide some incentive to use shields in general, which can only be a good thing.

The mantle and lycanthrophy cloak are both likely way too risky to use and may end up being just a flavour item, which by itself isn't a bad thing.

Cloak of flight again is not really something a new player will be able to find out without outside sources, there should at least be a tiny chance of it spawning naturally.

The armor cloak should be a fine addition so long as the numbers are tuned well enough, exchanging the currently optimal elemental resistances for more armor should come with some drawback.

Y'yter Durr could be neat! I would likely end up just staying in human form since stat and skill gains do not transfer between polymorphs.

I'm not so sure about the artifact changes. Keeping the player from multiples of artifact weapons is might be fine (rip 2x Turox, you were the best), but denying material changes will simply mean some of them will be even less viable. Take Saal'Thul for example: invisibility is easy enough to come by from wands or rings for ordinary adamantine or valpurium short swords to be preferrable in every case. I don't think the change works flavour-wise either, if mortal magic scrolls of enchantment or repair can still be used.
Posted by JoKe, May 9, 2017 at 12:21 am
enner problems in forum Tips, Tricks, and Secrets
Both striking and lightning are sadly very ineffective against enner, so you better have multiple wands to take him down.

If you're good at melee and have haste, telecontrol & teleport, whacking him to bits is pretty safe if the teleport is timed right after a scream. You'll of course need to know where he is to do it.
Posted by JoKe, Apr 12, 2017 at 4:28 am
Metal armor in forum Suggestions and Ideas
Thing is, comparing materials with <15 INT requirements to stuff like arcanite, angel hair or even phoenix feather is of course going to look bad for the lower tier materials. Aside the obvious issues with stat penalties, iron alloy armor really mostly suffers because of the meteoric steel - adamant rift. Meteoric steel gives comparable AV to mithril at much lower INT requirements, but there are no higher tier iron alloy materials until adamant to actually compete with arcanite alloys or leathers. Adamant does suffer from the weight and stat drops when it comes to armor for limbs, but for stronger characters it's an awesome material for chest plates or helmets surpassed only by valpurium at 55 INT.

Buffing AoGH I do agree with though, it'd be nice if it wasn't just a trap.
Posted by JoKe, Mar 29, 2017 at 9:37 am
You stop digging. in forum Trouble Shooting and Bugs
red_kangaroo wrote
We have this. JoKe's guide is very well written, IMO.
It's also very spoiler-heavy and not really aimed at complete beginners, if we're talking about an IVAN 101.
Posted by JoKe, Dec 4, 2016 at 4:09 pm
Armless Run (ATTEMPT TWO) in forum General IVAN Discussion
The boots of kicking will probably be more valuable until you can find boots of strength simply to get your damage up. Fejoa did a pretty sweet investigation into strength vs kicking if you're interested.


capristo wrote
What's with the glowing pattern of squares on the visited sections?
Just an artifact from being shrunk slightly, full size is normal.
Posted by JoKe, Nov 30, 2016 at 5:36 pm
Slob's Challenges in forum Community Gaming
Another way to do 26:
SPOILER ALERT. Click here to see text.
Betray a pet, drop some whips of thievery on your square and get them kicked at Petrus.
Posted by JoKe, Oct 15, 2016 at 5:54 am
Willpower to counter magic in forum Suggestions and Ideas
Willpower would be the most boring stat ever and frankly just feature bloat if all it did was resist spells or shorten magic-itises. Tying magic control to WIL instead of INT could be neat, but IVAN needs more controllable magical effects than just teleport or polymorph to not just be an extra annoyance to level.

I don't personally find mages in need of another counter, as it stands they're simple enough to kill with detect material + controlled teleport. All of their effects can be negated individually, including equipment teleportation by just carrying spares. I did however like chao's idea:

chaostrom wrote
So, a ring of stability that negates all polymorph/teleport in your square?
There's a similar amulet in Nethack I believe, haven't played it enough to have found one.